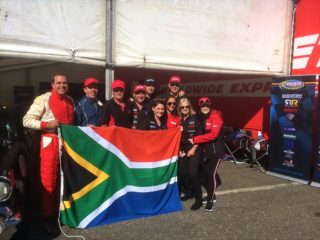 They were at a disadvantage, since the overseas drivers in Corvettes, TVRs and Mustangs race on slick tyres, versus the South African cars’ pre-1966 Dot rated tyres and limited modification suspension.

Jonathan du Toit had a great weekend to finish seventh overall and second in his class.

Mark du Toit’s Black Widow Chev played up with gear linkage, tyre lamination and finally at the end of the day an engine blow-up.

Paige Lindenberg in the enormous Fairlane finished all her races while Peter Lindenberg was very competitive in the first two races before the Mustang developed engine maladies and did not make it to line for race three.

The South African Historic Car Safari to the Zandvoort and Brands Hatch circuits has been a great experience with the aim of creating interest in more competitors coming to South Africa with their cars for our annual Passion for Speed Festivals.