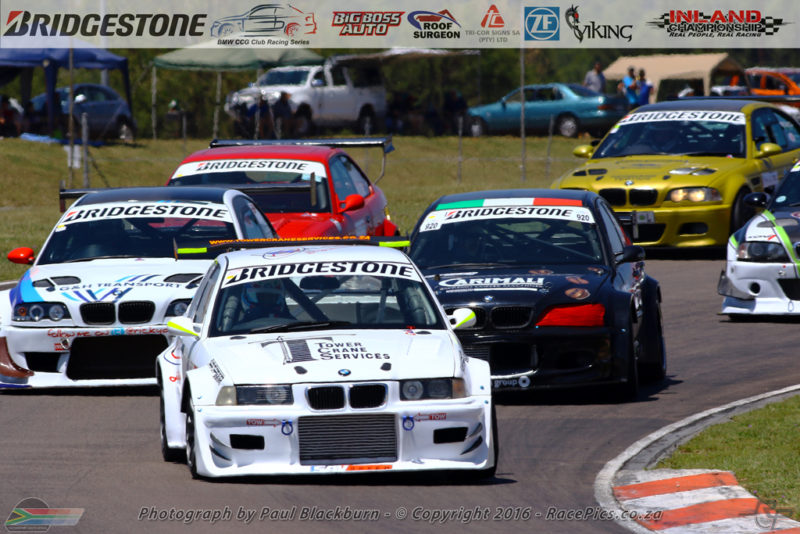 The first round of the 2016 Inland Championship took place at the Zwartkops Raceway on Saturday 5 March, with close and competitive racing setting the tone for an exciting year ahead.

The tag line of ‘Real People, Real Racing’   rang true with the diverse field of categories catering to everyone’s taste.

A drama filled second race saw the red flag come out on lap four when an electrical short caused a catastrophic fire in Hoy’s immaculate Renault. When the race restarted it was Mackie Adlem who took the lead ahead of Morgenrood and Terry Wilford (Ford Falcon). Adlem held on for the win ahead of Wilford with young Amos Cockerham Junior (Chev Corvette) grabbing third position. Hepburn claimed the GT2 honours yet again with Vianna taking the double in GT3. Adrian Dalton (VW Golf) picked up the win in GT4 with Jimmy Tsimenglou (BMW M3) taking the double in GT5.


The Bridgestone BMW Car Club series made their first appearance as a Regional category with two action packed races keeping the fans on their feet. Poleman Julian Fameliaris (E36 328i Turbo) grabbed the lead ahead of Carlo Garbini (E46 328i Turbo), Manny Ribeiro (E46 M3 GTR). Fameliaris held on for the overall and class A victory ahead of class B winner Ribeiro with Garbini in third. Mish-al Sing (E30 325i) took the class C honours with Craig Ball (E36 328i) taking class D.

An inverted grid by class for the second race set the cat amongst the pigeons. A hard charging Ribeiro took the overall and class B victory ahead of class A winner Dino Fameliaris (E46 M3 Turbo). Jimmy Tsimenglou (BMW M3) took the class C honours with Ball taking the double in class D.

The Yokohama MPC and SRA event produced two close races as well. Dirk Lawrence (Honda Ballade) took the overall and class A victory ahead of team mate Jeff Langeveldt (Honda CRX), while third placed Adrian Dalton (VW Golf) claimed the class B win. Kalyn Miller (Ford Icon) claimed the class C honours with Fritz Kleynhans (Shelby) taking the SRA class. The second race picked up where it left off with Lawrence taking the double ahead of Langeveldt and Dalton once again. Miller showed the men the way around the circuit to take the double in class C with Mario Nardini (Nardini SP308) turning the tables to take the win in the SRA class.

The 250 Superkarts were by far the fastest machines on the day with some competitive racing in both races. The first race was won by Bevan Williams with a best lap of 1:00.870. Kyle Lawrence took second position with Dewald Brummer taking third. Williams kept his good record with another victory in race two, with Brummer getting the better of Lawrence to claim second.

The next round of the Inland Championship will visit the very popular Phakisa Freeway near Welkom on the 2nd of April.

For any enquiries, photographs or media reports on the Inland Championship feel free to contact Paul Blackburn on 082 900 6443 or media@racepics.co.za.